For Touchpoint Vol. 10 No. 3, I followed up with Anna-Sophie Oertzen after meeting at an event in Amsterdam, to learn more about how her research into the value of co-creation can enlighten service designers. Our discussion follows.

Anna-Sophie is currently employed by the Köln International School of Design (KISD) at the TH Köln and enrolled as a PhD Candidate at the School of Business and Economics at Maastricht University. She is also a Research Fellow with the Service Design for Innovation Network (SDIN), a Marie Curie training project of the European Union’s Horizon 2020 Research and Innovation Programme.

Me: You've chosen to dive deeply into one of the main techniques of service design for your thesis: co-creating services. What interests you about this topic?

Anna-Sophie Oertzen: Let me start with a brief look into the past. The participation of users in provider activities has been around for decades; for instance, people going to the supermarkets, collecting their food, paying at the check-out counter, and taking their food home, is a form of participation in the provider’s activities. During this time, users were regarded as “partial employees”, improving the productivity of providers. With the start of the twenty-first century, the mindset around user-provider collaboration began to change. Instead of instrumentalising users for productivity gains during service delivery, they became more active collaborators during earlier and later phases of the service process. Today, this active collaboration is often termed co-creation and is recognised as the next frontier of competitive strategy.

I find it really interesting that an industrial practice confined to the service delivery and steered by providers, has transformed into a much broader application that includes innovation activities to conceptualise and design services and is increasingly demanded by users. We have witnessed the changing role of users from passive and isolated to active, informed, and connected. To satisfy the changing requirements of users, providers are forced to re-examine the traditional system. Products and services can no longer be seen in isolation, but to succeed, they need to be viewed as part of the larger ecosystem. Offerings cannot be “pushed” onto the market, but they have to be “pulled” by users. Providers no longer act autonomously, but have to integrate the user’s voice. I like to believe that one of the keys for this on-going transformation that has to serve the needs of users, providers, and society, is co-creating services together with different actors.

Several weeks ago we had the chance to meet at an SDN Netherlands Chapter event, in which you shared some of your insights so far and ran a workshop for attendees. Do people share your views on co-creation, or see it differently? What were some of your key takeaways from the workshop?

Together with my co-facilitators, Birgit Mager and Gaby Odekerken-Schröder, we had a fantastic time with a very active crowd during our co-creation event in Amsterdam! Most people agreed that co-creation is essential in order to put the user at the centre of attention. However, in design, co-creation efforts are focused often only on the innovation activities of a new offering. In my view though, service co-creation has the potential to be widely applied across different situations and contexts. Co-creation exists in different actor constellations, for instance in C2C, B2B, or B2C contexts, and also across industries in the public and private sectors. It spans ideation activities in earlier phases of the service process (e.g., co-ideation and co-valuation), design activities (e.g., co-design and co-test), implementation activities (e.g., co-launch), and also later phases of the service process, such as delivery activities (e.g., co-production and co-consumption). In this sense, co-creation and service design are like two peas in a pod - they are complementary through their holistic, contextual, and iterative nature. 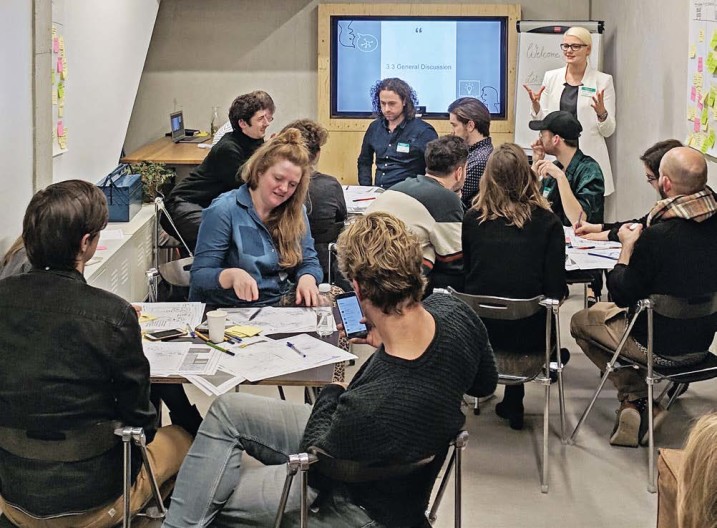 You are pursuing your PhD at the School of Business and Economics at Maastricht University and the Köln International School of Design at the TH Köln, Technical University of Applied Sciences. How did that come about, and what can service designers learn from being exposed to different perspectives on service?

I have the wonderful opportunity to be part of the Marie Curie training network ‘Service Design for Innovation’ (SDIN), which is funded by the European Union’s Horizon 2020 Research and Innovation Programme. The mission of SDIN is to encourage the widespread application of service design in European organisations to leapfrog service innovation. As an Early Stage Researcher of SDIN, I am employed by the Köln International School of Design and enrolled as a PhD Candidate at the department of Marketing and Supply Chain Management at Maastricht University. Thus, I get to enjoy the best of both worlds to inform my research.

Throughout the last years, I realised that there is an overwhelming number of conceptualisations and perspectives for the concepts of service, service design, and co-creation. Depending on the perspective, people may talk about very different things. To speak the same language, we should clearly communicate what we mean when using certain terms. However, while labels are important to find a common denominator and provide a sense of direction, we should not try to fit every idea into neat disciplinary boxes. Rather, it is important to learn from these other perspectives and build on them.

To solve complex problems and navigate paradoxical challenges, interdisciplinarity can be very powerful because it enables tapping into knowledge pools of other disciplines and synthesising the ideas.

Service designers are sometimes guilty of approaching user research too superficially – poorly choosing representative subjects, or misinterpreting findings, for example. Are there also 'wrong' ways of carrying out co-creation?

Before carrying out any co-creation activity, we should ask ourselves whether co-creation is really needed. Then, we have to consider what kind of co-creation makes most sense; would it be co-creation workshops with different actors, open crowdsourcing, or in-store interactions with users? Once we have decided in favour of co-creation and what type of co-creation activity we want to conduct, it is essential to invite the right participants and to avoid a ‘participation façade’. Unfortunately, co-creation has become somewhat of a buzzword and is occasionally applied simply because there is the belief that it must be done. In those cases, co-creation is often conducted superficially, risking only the impression of true participation. Ironically, this failure of co-cre­ation instead results in designers projecting their own assumptions onto the understanding of others, risking exclusion, and controlling the sharing of experiences. As service designers facilitating the co-creation activi­ty, we have to be mindful to carefully listen to people, understand them without imposing our own perceptions, and find the best way possible to integrate their needs into our designs. It is a challenge to objectively filter the lived experience of others, while at the same time subjectively build on our own lived experience. To make sure that our designs are truly user-centric, it is not enough to keep the user at the back of our mind after one co-creation workshop; rather we should aim for continuously and iteratively including the people in our activities that are the focus of the design initiative.

To wrap things up, what is one piece of advice you'd give to practicing service designers so they can get the most value out of co-creation?

There is no one-size-fits-all approach to co-creation. Successful co-creation is not just about selecting the right participants, but also about involving them at the right stage, asking the right questions, and nourishing a supportive organisational environment. Listen to people, embrace their ideas, and deliver according to their needs – and make sure your organisation is ready to co-create, too!

This article also appears in Vol. 10, No. 3 of Touchpoint, a journal published three times per year by the Service Design Network, and providing in-depth coverage of all aspects of the service design discipline.

An Interview with Lara Penin

An Interview with Robbie Bates

An Interview with Simone Cicero